Commonly referred to as the Gateway to the Smokies, Sevierville is one of the most interesting places to visit in East Tennessee. While many visitors travel through to reach Pigeon Forge and Gatlinburg, there are many attractions and hidden gems located in Sevierville as well! Not only is this a fun place to visit, but it also holds a tremendous amount of stories and history. Here are 5 interesting facts about the history of Sevierville Tennessee:

1. Where the Name Came From

Sevierville is named after John Sevier, who is one of the leading figures in the history of Tennessee. He is known as a frontiersman, soldier, war hero, and politician who helped shape what we now know as the great state of Tennessee. He served in the American Revolution and distinguished himself at the battle of King’s Mountain. Another fun fact about Sevier is that he was the governor of two different states! In 1784, he became the first governor of the State of Franklin, which later became known as North Carolina. When Tennessee became a state in 1796, he served as its first governor for two separate stints covering 11 years total.

2. Historic Buildings All Around 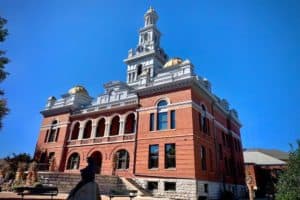 As you make your way through Sevierville, you will notice a ton of historic buildings, especially in the downtown area. One of the iconic landmarks of the town is the Sevier County Courthouse. While there have been five total courthouses in the history of Sevierville, the current one has been intact since 1896. The building was designed by the McDonald brothers and it utilizes bricks manufactured by Sevierville resident Issac Dockery. While you are checking out the courthouse, be sure to get your picture made in front of the Dolly Parton statue outside! As you probably know, Dolly calls the Smoky Mountains home so a statue was built in honor of her kindness and willingness to give back to the community.

Dolly Parton is undeniably Sevier County’s most famous resident. She was born in Locust Ridge, which is a part of the Sevier County area. The cabin that she was raised in was only 2 bedrooms, and you can now see a replica of it at Dollywood. As Dolly was growing up, her house lacked electricity and running water, but she still looks back at her childhood in the Smokies as one of her most beloved memories. Parton got her start by performing on local radio stations in nearby Knoxville. After graduating high school, she took the leap of fame when she moved to Nashville where she started her incredible career in country music.

4. Expansion to the City In the early days of Sevierville Tennessee history, it was home to rural farmers and a couple of small businesses. Today, it has grown into one of the most visited cities in all of the Smoky Mountains. Throughout the town, you will find everything from an underground cavern to one of the best places to ride go-karts in Tennessee! Even with all the current shopping and attractions available, the town is continuing to grow with the anticipation of SkyLand Ranch and Dig’n Zone coming soon, as well as the 407: Gateway to Adventure project. As you can see, Sevierville is a must-visit destination on your next trip to the Smokies.

5. Peace by the River

Even with all the attractions and shopping destinations, Sevierville is still a place where you can escape to enjoy the serenity of the mountains. When you arrive, you will notice that the Little Pigeon River runs through the middle of Sevierville. In the early days, the river would run over after heavy rainfalls, which began to flood many parts of the town. Luckily, the Tennessee Valley Authority (TVA) began a flood protection program which was completed in 1967 and has prevented any further major flooding to the area.

Now that you know a little more about the history of Sevierville Tennessee, check out some of the wonderful things to do in Sevierville for the entire family! We hope to see you soon in the Smoky Mountains!