Cades Cove is known as one of the most peaceful and relaxing areas in The Great Smoky Mountains National Park. However, the silence and beauty do not exclude this area of the national park from having a few little secrets hidden away.

Which of these secrets of Cades Cove shocked you the most? Let us know in the comments below.

(See Related: 13 Facts About the Smoky Mountains You Won’t Believe)

1. No American Indians Ever Lived in Cades Cove

According to the National Park Service’s website on Cades Cove, there is no archeological evidence supporting the theory that Native Americans, specifically the Cherokee Indians, ever called Cades Cove home. There is evidence that proves that the Cherokee tribe used this area for hunting for hundreds of years, however the European settlers were the first to ever establish residency here.

Interestingly enough, after the early settlers came in 1821, the population of Cades Cove quickly rose above 685 by 1850. Cades Cove has had several names over the centuries. The Cherokee Indians once called this area “Tsiya’hi” or “Otter Place.” However when the European settlers moved in, they changed the name to Kate’s Cove in honor of Chief Abraham of the Chilhowee tribe’s wife, Kate.

Chief Abraham is also who Abrams Creek is named after.

The name was later changed to Cades Cove in remembrance of Tsiya’hi leader, Chief Kade.

There is also documents that support that early settlers often referred to the area simply as The Cove.

3. The John P. Cable Mill Was Not the First Cades Cove Mill

More likely than not, if you are asked which was the first mill built in Cades Cove you will answer the John P. Cable Mill. There is no denying that the Cable Mill is the most popular mill to be associated with the area, mainly because it is the only one still in operation, but it was not in fact the first.

Robert Shields, a Revolutionary War veteran of Virginia, purchased 1,600 acres from William Tipton in 1831. On this land, Shields built the first overshot water-powered grist and flour mill in Cades Cove with the help of David Emmett. Shields is also responsible for helping build a bloomery forge to produce a lower-grade of iron in the area.

4. Some Historic Buildings in Cades Cove Have Been Moved Speaking of the John P. Cable Mill, it is interesting to note that many of the historic buildings in Cades Cove surrounding the mill are not in their original location. The mill itself is, but most of the other buildings in the complex were brought in from elsewhere in the park.

Buildings that were moved include The Gregg-Cable House. Originally located on Forge Creek Road, the Gregg-Cable House was originally built by Leason Gregg in 1879 after he bought an acre of land from John P. Cable. Gregg lived in this building with his family while operating a store out of the first floor.
In 1887, Gregg sold the house to Rebecca Cable and her brother Dan, children of John P. Cable. The siblings continued to operate the store on the first floor for roughly 8 years before turning the home into a residence/boarding house.

Both the blacksmith shop and the Visitor Center were built after the Great Smoky Mountains National Park was established. That being said, the blacksmith shop does replicate the type of structure that one would typically see during the time of the early settlers.

5. Cades Cove is the Only Place on the Tennessee Side of the National Park With a Working Grist Mill

One of the things that makes The Great Smoky Mountains National Park different is that it is one of the few national parks in the country that was created with land that was once privately owned. Many of the other national parks were made from undeveloped areas of the country.

However, thanks to the successful milling industry that once was found in Cades Cove, this area is home to the only working grist mill in the Great Smoky Mountains National Park, the John Cable Mill.

Today, visitors can tour through the mill and watch as workers grind down grains into useable products for baking that can then be purchased at the Cades Cove Visitor Center.

The only other working grist mill in the area can be found at The Old Mill Square in Pigeon Forge.

6. Cades Cove is the Single Most Popular Destination in the Great Smoky Mountains National Park 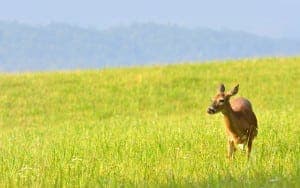 With over 2 million visitors annually, Cades Cove holds the tile as the most popular area in The Great Smoky Mountains National Park. We at Visit My Smokies are not surprised by this number thanks to the overwhelming amount of natural beauty and history that can be found along the Cades Cove Loop Road.

As a whole, The Great Smoky Mountains National Park welcomes a total of 9 million visitors annually. This high volume of visits has consistently earned the Smoky Mountains the title of the most popular national park in the United States year after year.

7. Cades Cove is the Only Section of the National Park That Closes at Night

What makes being the most popular area of the Great Smoky Mountains National Park even more special for Cades Cove is that it is also the only section of the park to close at night.

The gate at the main entrance of Cades Cove closes at sunset every night. Don’t worry, you won’t be stuck in the area all night if you find yourself in Cades Cove after the gate closes. There is another exit on the loop road that you can take.

8. The Entrance to Cades Cove Isn’t the Original Entrance That is correct. For the 100 years before The Great Smoky Mountains National Park, residents and visitors entered and left Cades Cove by five narrow unpaved roads. The entrance that we use today was not built until after the park was established in 1934.

The five roads used were:

Today, these unpaved roads are now mostly hiking trails used by visitors to the national park. There was a road that followed the same general route as today’s Cades Cove Loop Road that was used by the early settlers. Their version of the road was a two-way unpaved road.

Do you have your own shocking fact about Cades Cove you want to add to this story? Let us know in the comments below!