The Fascinating History of The Apple Barn in Sevierville 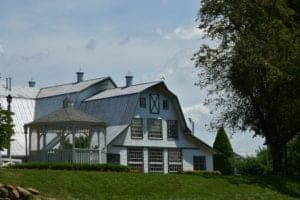 For generations, a family called the Mullendores farmed the land where The Apple Barn Village sits today. In the 1920s, they added the farmhouse where their family lived for many years. Then, in 1972, the hardware store owner named Bon Hicks and a local pharmacist named Bill Kilpatrick came together to purchase the 65-acre farm.

The Kilpatricks renovated the farmhouse and decided to move in to raise a family of their own. Bill enjoyed working on the farm, but one of his favorite interests was horticulture, so he planted semi-dwarf apple trees on the property. Once the trees matured, they began to thrive, and the Kilpatricks sold apples every fall and experimented with them by making cider in an old press.

As more trees grew and apples were harvested, the Kilpatricks came up with a plan to renovate the old cattle barn. It was opened the first time in the fall of 1981 for about 6 weeks. Since the 1982 World’s Fair in Knoxville brought in even more visitors asking for cider by the glass, the family opened the Cider Bar in the barn as well.

The Kilpatricks weren’t the only ones using their apples to bring in visitors! A neighbor of theirs used some of their apples to make fried apple pies, which were a huge hit with guests. A kitchen was added to the barn so they could create apple pies, fritters, stack cakes, and much more. By 1986, the Kilpatricks had moved out of the farmhouse since their business was growing. The family contacted Stokley Hospitality Enterprises to help them renovate the farmhouse into the Applewood Farmhouse Restaurant, Sevierville’s oldest restaurant.
Instead of continuing to make baked goods out of the general store, the creamery was opened in 1991. Guests could taste delicious homemade ice cream and baked goods, or take some home with them! Then, the Candy Factory was added to create a new experience of watching candies be made on vintage machines.

Since Applewood Farmhouse Restaurant did so well and there was always overflow, Applewood Grille was opened in 1995. The winery was also opened so guests could taste and purchase wines made from the apples grown in the orchard. In 1999, the candle and Christmas store opened to provide visitors with even more entertainment at The Apple Barn in Sevierville.

By the time the 2000s rolled around, the original semi-dwarf trees started producing less apples. In the 2010s, the orchard was completely changed by planting dwarf root stock trees in place of the original trees. This variety of apple tree produces more apples than the original trees, and since they have so many apples on a single tree, trellises are used to support the trees! Guests still come from all over the world to experience The Apple Barn in Sevierville today. You can walk through the barn and pick up some souvenirs to take home, or stop by the creamery to try sweet treats. See how wine is made from apples at the winery, and watch candy makers use centuries-old machines to create delicious candies. You’ll love feeling like a part of the farmhouse experience and history of the area when you visit The Apple Barn!

Since you know more about The Apple Barn in Sevierville, you’re ready to visit! Before you head down for your next trip, learn a little more about Sevierville TN and all the places you should see! Keep the Ball Rolling: All The Details About The Pines in Downtown Sevierville Everything To Know About Santa’s Country Christmas at SkyLand Ranch What is Shadrack’s Christmas Wonderland in Sevierville?