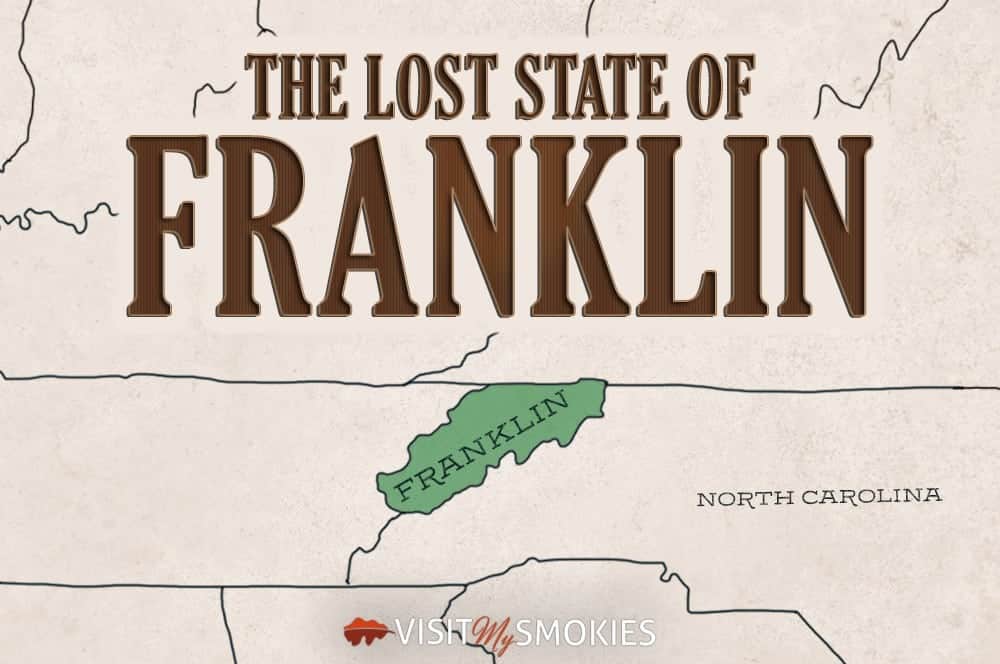 The cities of Gatlinburg, Pigeon Forge, and Sevierville are some of the most beloved destinations in the state of Tennessee. If history had gone just a little differently, however, all of these cities would belong to an entirely different state! Before Tennessee was on the map, Sevier County was part of “Franklin”, a territory that almost became the 14th state in the Union. Visit My Smokies did a little research to bring you the strange story of the Lost State of Franklin.

Breaking Away from North Carolina After the end of the Revolutionary War, the frontier families who lived in present day East Tennessee faced an uncertain future. Although North Carolina laid claim to the land west of the Appalachian Mountains, they didn’t seem to know what to do with it. In 1784 the state voted to give the land to the U.S. Congress to pay off their war debts. Then, after a new election in the North Carolina legislature, the Tar Heel State’s representatives changed their mind and decided to hold onto the territory. As North Carolina vacillated, the people living in the frontier feared that the state would fail to protect them if the neighboring Native American tribes decided to attack.

Taking matters into their own hands, the settlers decided to form their own state. On August 23, 1784, roughly 50 frontiersmen signed a document in the city of Jonesborough declaring their independence from North Carolina. Revolutionary War hero John Sevier (whom the city of Sevierville is named after) headed the loosely organized government of the territory dubbed “Frankland”. In the spring of 1785, the new territory applied to the U.S. Congress for statehood. North Carolina was furious that the frontiersmen had seceded without their permission, so its representatives vigorously opposed the measure.

In an attempt to win over a powerful ally, Frankland changed its name to “Franklin” in honor of the popular Founding Father. John Sevier even wrote a letter to Benjamin Franklin seeking his support, but Franklin declined to get involved.

Although the Franklin territory received the backing of seven states, it failed to reach the two-thirds majority necessary for statehood. Rather than giving up and returning the land to North Carolina, Sevier and his comrades decided that the state of Franklin would continue with or without recognition from the federal government.

The Rogue State of Franklin

Despite its failure to become America’s 14th state, Franklin grew at a rapid pace. In late 1785 and early 1786, about 10,000 families moved to the territory from Virginia and North Carolina. During this period, Franklin also expanded from its three original counties, to eight. Franklin’s counties included: The extra-legal state of Franklin essentially became an autonomous nation, with its own constitution, court system, and treaties with the Native Americans. However, Franklin never established its own paper or coin currency, using a barter system instead. People traded tobacco, corn, brandy, and animal skins for other goods and services. As governor of Franklin, John Sevier received a salary of 1,000 deer skins a year!

The Demise of Franklin North Carolina did not take Franklin’s rebellion lying down. In 1787, North Carolina established a parallel government in Jonesborough under Col. John Tipton that competed with Sevier’s regime in Greeneville. Tensions between the two governments erupted in the winter of 1788, when agents of North Carolina seized John Sevier’s valuables and several of his slaves to settle his tax debts. In response, Sevier marched to Col. Tipton’s home with over 100 men to reclaim his property. The resulting “Battle of Franklin” ended with three deaths, a number of injuries, and Sevier’s retreat.

Soon after the skirmish with North Carolina’s troops, the state of Franklin faced the prospect of an invasion from the Chickasaw, Chickamauga, and other Native American tribes. With no other friends to turn to, Governor Sevier sought assistance from Spain.

Sevier’s conspiring with a foreign government proved to be the final straw for North Carolina. In August of 1788, North Carolina arrested John Sevier. Although he was quickly freed from jail by his supporters, Sevier ultimately came to the conclusion that it was time to let the state of Franklin go. The  Franklin rebels surrendered and swore their allegiance to North Carolina, which sent troops to fight off the hostile Native American forces. The state of Franklin only lasted four years (1784 – 1788), but its legacy remains. The land that comprised Franklin would become the northeast section of Tennessee, which was admitted into the Union in 1796. John Sevier also landed on his feet, becoming brigadier general of the Southwest Territory and later the first governor of Tennessee.

To learn about one of the most famous people born in the Lost State of Franklin, read our blog about Davy Crockett!