Where is the Troll Bridge? 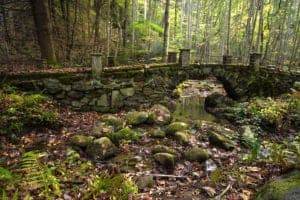 The Elkmont Troll Bridge is located near Gatlinburg, Tennessee near the Elkmont Campground. To get to the bridge, you will be hiking along the Little River Trail, a moderate hiking trail that runs 4.9 miles roundtrip. About 100 feet into the trail, you will see a small path on the right. Follow this path through the woods until you come up on the bridge that is built over a small creek. The bridge is covered in moss and made of stones, creating a whimsical sight. Many people love stopping and taking pictures of the bridge or of themselves on the bridge. It will definitely make you feel like you’re in a fairytale!

Why the Bridge was Built

In the early 1900s, Elkmont became the second largest town in the county because of the logging and mining industries that were coming to the area. The town had a post office, a school, a hotel, a general goods store, a church, and homes.

When the logging railway was built, people would travel from Knoxville to the Smoky Mountains for vacations, and they would stay in vacation homes in Elkmont. This bridge was built at some point as part of this community, but no one is certain who did it or why. Today, these old vacation homes and businesses stand empty. So how did Elkmont go from a booming resort community to a ghost town?

The U.S. Government announced plans to create national parks across the country, and the Great Smoky Mountains National Park was established in 1934. This meant that residents who lived in the area had to decide if they wanted to sell their homes for full value and relocate immediately or sell their properties to the National Park Service for a discounted price and stay in their homes for their lifetime. Many people chose to stay in their homes until they passed away.

These leases expired in 1992, and there were about 70 historic buildings in the area. No one maintained them, and many began to deteriorate, which led to the small community being called the Elkmont Ghost Town.

Other Hidden Gems in the Smoky Mountains

Now you know more about the Elkmont Troll Bridge and where to find it! If you want to find other hidden gems in the Great Smoky Mountains, check out these cool places:

House of the Fairies One of the best secret spots in the national park is the House of the Fairies. The little house is actually a spring house, and it is tucked away off the main trail of Twin Creeks Trail. You’ll hike through the woods and find the spring house on the side of the mountain. With moss and vines almost covering the spring house, you’ll see where the name comes from since it looks like fairies could appear at any moment!

Another hidden gem you’ll want to try to find is Gregory’s Cave in Cades Cove. While you can’t enter the cave, you can check out the entrance! This cave actually used to be a commercialized attraction in the 1920s, but it was then turned into an emergency shelter. You’ll get to hike along a dirt road to find this hidden gem! You may not know since it is considered a hidden gem, but there is a secret tunnel under Clingmans Dome! Its actual name is Thomas Divide Tunnel, and it is located less than a mile west of the junction with Newfound Gap Road. It was built to prevent hikers on the Appalachian Trail from having to cross Clingmans Dome Road.

Now you know more about the Elkmont Troll Bridge and other secret spots in the Smokies! Learn even more about the Great Smoky Mountains National Park for your next trip!