The entire state of Tennessee is known for its excellent live music, and Pigeon Forge is no exception! The Pigeon Forge area is a magnet for talent, drawing in and cultivating some of the very best performers in the country. Visit My Smokies has put together a convenient guide to four of our favorite spots for live music in Pigeon Forge: 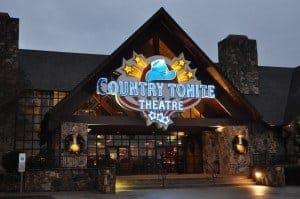 Named the “Best Live Country Show in America” and the “Best Show in the Smokies”, Country Tonite is a can’t-miss addition to any vacation in Pigeon Forge! Combining classic and contemporary country music with family-friendly comedy and old fashioned American patriotism, this two hour show is sure to delight guests of all ages. Even if you’re not the world’s biggest country music fan, you’ll love the show’s high-energy atmosphere and world class production value.

Here are a few quick facts about Country Tonite: If you never got the chance to see Elvis Presley perform (or you wish you could see him again), you’re in luck, because The King is always at the Memories Theatre! In this one of a kind tribute show, the very talented Will Styles truly becomes Elvis on stage, capturing his singing, dancing, mannerisms, and sense of humor to a tee.

Joining Mr. Presley on stage is a rotating cast of celebrity impersonators. Some of the “stars” you may see at Memories include: The Smoky Mountain Opry is another one of the best places to hear live music in Pigeon Forge. With music from every era and genre, this unique variety show has something for everyone. Guests can expect to hear powerful renditions of classic songs made famous by Garth Brooks, Stevie Wonder, The Beatles, Carrie Underwood, Frank Sinatra, and a host of others. In addition to great music, the show also features state of the art special effects, including: Everyone knows that Dollywood has some of the best roller coasters and thrill rides in the Southeast, but some people forget that it is home to amazing musical entertainment as well! Since music has been so important in her life, Dolly Parton wanted her theme park to reflect the rich musical history of the Smokies and the rest of the country. Some of the most popular music shows at Dollywood include:

In addition to the park’s permanent musical entertainment, Dollywood also hosts award winning performers from all around the world as part of its many seasonal festivals. October’s National Southern Gospel & Harvest Celebration features over 300 concerts with today’s biggest gospel stars, including Guy Penrod, The Isaacs, The Collingsworth Family, The Hoppers, Ernie Hasse & Signature Sound, Karen Peck & New River, and many more.

From November through early January, Dollywood’s Smoky Mountain Christmas celebration will feature a number of special holiday musical performances, including the acoustic Appalachian Christmas show at the Back Porch Theater, ‘Twas The Night Before Christmas, Christmas in the Smokies, and Christmas with the Kingdom Heirs.

The Festival of Nations (March – April) showcases international musical entertainment. In years past, Dollywood has hosted Zambian vocalists, Colombian dancers, Paraguayan harp players, and Irish folk musicians. Visiting the theme park during the Festival of Nations is like taking a trip around the world!

The Barbeque and Bluegrass Festival (May – June) is a beloved springtime tradition at Dollywood. As you chow down on mouthwatering Southern BBQ, you’ll have the chance to hear some of the most popular bluegrass musicians in the nation. Performers from years past include Riders in the Sky, The Time Jumpers, The Willis Clan, The Gibson Brothers, Balsam Range, and Hot Club of Cowtown. There are typically over 250 concerts as part of this festival! The best part of enjoying the live music in Pigeon Forge at Dollywood, is that all of the concerts are free with park admission! The only exception to this is the Showcase of Stars, a series of ticketed concerts with The Band Perry, Kenny Rogers, and Dolly Parton herself.

For more great places to visit on your vacation, check out our complete list of Things to Do in Pigeon Forge!