Top 8 Interesting Things You May Not Know About Dollywood

Dollywood is one of the most popular attractions in the Pigeon Forge area. If you’ve visited before, you have probably been to the theme park. But how much do you know about it? We want to share some facts with you about the popular attraction! Here are the top 8 interesting things you may not know about Dollywood: Dollywood wasn’t always named after Dolly Parton. The original theme park opened in 1961 as Rebel Railroad. It featured a steam engine train, a saloon, blacksmith shop, and other attractions that celebrated the culture of the Smoky Mountains. In 1970, the park changed ownership and was rebranded as Goldrush Junction. Several attractions were added, including kid rides and an outdoor theater. Then in 1977, ownership changed again and the park’s name was changed to Silver Dollar City. Craftsmen were brought in so people could watch them and purchase their creations. In 1986, Dolly Parton finally joined and the park came to be known as Dollywood.

2. Dolly Parton has never ridden any of the rides.

Dolly says she has never ridden anything at Dollywood. She suffers from motion sickness, which she apparently inherited from her father. Not only that, but she also has a fear of roller coasters! Dolly has also joked about having too much to lose to ride the rides, such as her famous hair!

3. It is home to one of the largest eagle sanctuaries. One thing people love about Dollywood is how much they give back. This theme park is home to one of the largest eagle sanctuaries in the United States. All of the eagles that call this sanctuary home are non-releasable. There’s a 30,000-square-foot aviary the eagles get to call home. Guests can walk past the enclosure and watch these amazing birds, or you can watch them on their live video feed! If you’re visiting the park, you can also attend the Wings of American: Birds of Prey show to learn more about them!

4. They do maintenance on rides during the closed season.

Dollywood closes every year from early January to mid March. They actually close so staff can perform maintenance on the rides, get the park ready for guests again, and do updates and construction. Want more information about what happens when Dollywood is closed? Click here to find out about what happens to the roller coasters during off season! You may think being able to buy a 25-pound apple pie is a little unbelievable, but it is true! At Spotlight Bakery, they bake this huge dessert using 35 apples, butter, sugar, and dough. One slice of this pie weighs 3 pounds and can feed 4 adults. Want to take the whole thing with you? Just buy the whole pie, cast iron skillet and all!

There are two grist mills that are operational in the park. They look like they were built in the late 1800s, but that’s because that’s how they were designed! Every detail on these grist mills was crafted as if it was built in the 1880s. Lumber was sawed on the sawmill in the park, glass blowers made the windows, the shingles were split by hand, and blacksmiths forged the hardware. The mills grind flour and corn that are used in recipes throughout the park.

7. It is home to America’s first wing coaster. 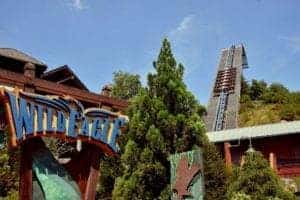 Dollywood is the home of the Wild Eagle, the first wing coaster in America. It is designed to make you feel like you are flying through the air, just like an eagle. The seats of the coaster aren’t on the track like a traditional roller coaster; they hang off the side so you really feel the air above and below you as you ride. The track stands at 21 stories above the rest of the park and reaches a top speed of 61 miles per hour.

8. Dollywood is home to the first wooden coaster to use a launch system.

The Wild Eagle isn’t the only Dollywood first. The Lightning Rod wooden roller coaster is the first wooden roller coaster to use a launch system to get up the hill instead of a chain lift hill. The mechanism had issues during its opening season, but now you can enjoy the ride! You’ll go from 0 to 45 miles per hour up the first hill. Then after the first drop, you then go up another hill and then go down the tallest one at 73 miles per hour.

Now you know a little more about Dollywood! Want to know about other great attractions you should check out on your next trip? Look at these Smoky Mountain attractions for some ideas!