If you are looking for a peaceful place in the heart of the Smoky Mountains where it seems as if time stands still, look no further than Cades Cove. What was once the home to over 100 early settlers has quickly become one of the most highly-visited areas in the national park, and rightfully so.

The area boasts some of the most unbelievable views of the Smoky Mountains, not to mention visitors to the Cades Cove Loop Road also have the unique opportunity to explore a handful of old homesites and buildings that have otherwise disappeared from our modern world. Not to mention, Cades Cove is also known for being home to some of the most playful wildlife in the Smoky Mountains. Now, if you have never visited the Cades Cove Loop Road, this may seem like a lot to take in. However, we at Visit My Smokies have put together a nifty map that will guide you and your family around Cades Cove, as well as a brief explanation of each of the historic sites and buildings you will find there. With the help of this guide, you and your family will look as if you have been visiting the Cades Cove Loop Road for years during your next trip to the Smoky Mountains.

Driving to Cades Cove is rather easy. From Gatlinburg, guests will follow the Parkway to the national park. When you pass the Sugarlands Visitor Center on your right, make a right turn onto Little River Road. You will stay on this road roughly 25 miles before it dead-ends at the entrance to the Cades Cove Loop Road.

If you are traveling to Cades Cove from somewhere other than Gatlinburg, please feel free to use the map below for driving directions.

The Cades Cove Loop Road is a one-way, paved road that follows an old logging railroad track. When the early settlers inhabited the area, it was an unpaved two-way road.

The orientation shelter located to the left of the entrance is where you can find a friendly team of park rangers and staff who will be more than happy to answer any and all questions you and your family may have before embarking on your journey along the route. 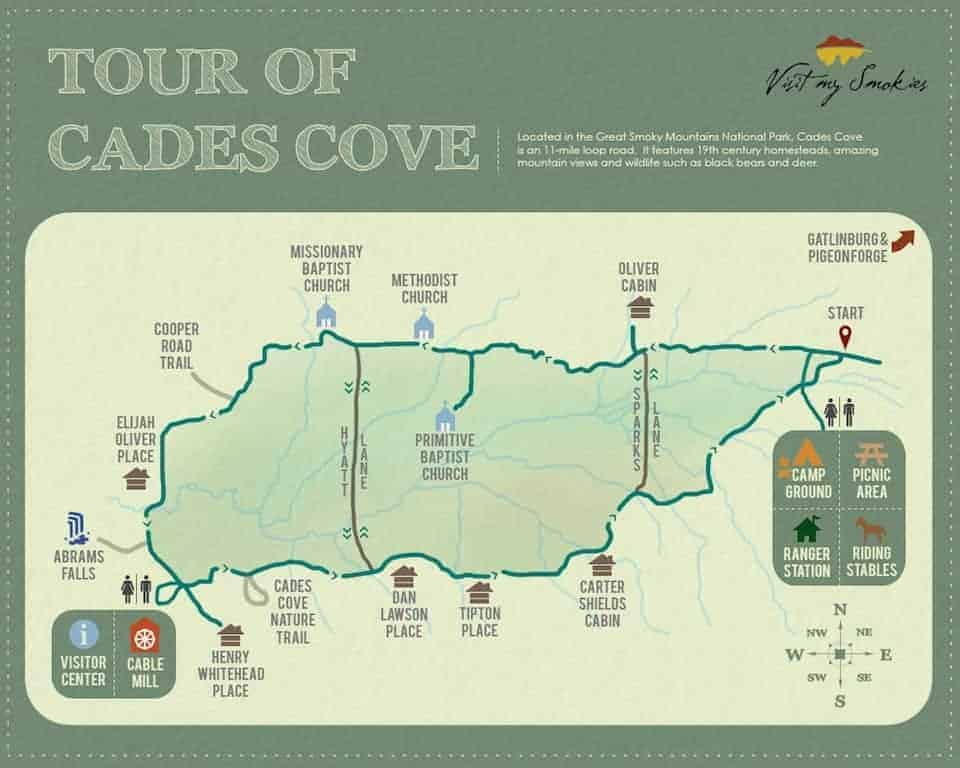 The first historical structure guests see along the Cades Cove Loops Road is the John Oliver Cabin. Named after one of the first pioneers to move into The Cove, this structure is held together mostly by gravity as the notched corners need no nails or pegs to keep it secured.

What is impressive about the John Oliver cabin is that it remained in the Oliver family for over 100 years before eventually being taken over by the National Park Service. The second building that guests will find when exploring the Cades Cove Loop Road is the Primitive Baptist Church. One of the latest historic buildings in Cades Cove to be added to the National Register of Historic Places, this church was actually the second church to be built in the Cove.

During the Civil War, the church’s congregation had to postpone their meetings due to the fact that their preacher had to leave the area. When the war ended, the people of the Primitive Baptist Church were able to resume worshiping in their church. Though not as prominent as the number of baptists, the methodists that called Cades Cove home wanted a church of their own. In the early 1820’s, they got their wish when the builder and eventual church minister J.D. McCampbell built the Methodist Church that visitors will find on the third stop along the Cades Cove Loop Road. This church stood as the main methodist church until it was replaced in 1902. The fourth historical building found along the Cades Cove Loop Road is the Missionary Baptist Church. This church was formed in 1839 when a small portion of the Primitive Baptist Church’s congregation split off to form a new church that was focused on missionary work.

During the springtime, guests can faintly see “Co. 5427” spelled out in daffodils to the right of the church. These flowers were planted by members of the Civilian Conservation Corps when they were building trails inside the Great Smoky Mountains National Park. What was once a direct route to Maryville, TN, the Cooper Road Trail is now a relaxing Smoky Mountain hiking trail. The route is named after Joe Cooper who is known for improving the wagon road when it was used by early settlers.

Today, the Cooper Road Trail is a total of 10.9 miles round trip. Considered a moderately easy hike, this route takes guests all the way to the Abrams Creek campground. Be sure to bring your camera when hiking this Smoky Mountain trail because you and your family will want to capture the interesting rock formations and beautiful nature scenes found along the hike. In the days of the early settlers, it was not uncommon for children to live close to their parents after they were married. That is just what happened with Elijah Oliver, son of John Oliver whose cabin you have previously passed.

It is important to note that Elijah did once move out of the Cove before the Civil War started. However, when the war concluded, he moved back into what is now known as the Elijah Oliver Place along the Cades Cove Loop Road. After passing the Elijah Oliver Cabin, guests to the Cades Cove Loop will find the trailhead for the Abrams Falls trail.

Abrams Falls is hands down one of the most popular Smoky Mountain hiking trails. The waterfall itself is only about 20 feet high, however, the amount of water that rushes over the rocks is a very impressive site.

The trail that leads from the Cades Cove Loop Road to Abrams Falls is about five miles round trip. Although a short distance experienced hikers to encourage beginners to be prepared for a slightly moderate hike. The Cades Cove Visitor Center is the official center for the National Park Service in the area. IT is also where guests can pick up their very own Cades Cove souvenir, a bag of flour from the grist mill, a history book about the area, and nearly anything else they can think of.

On a sunny day, don’t be surprised if you come across local story tellers hanging out on the front porch of the visitor center. Some days there are even folk singers eager to share the stories of the early settlers.

If you look to the left of the visitor center, you will also find a modern restroom. After you have had your fill exploring the Cades Cove Visitor Center, be sure to stretch your legs as you walk around the Cable Mill historic area. In addition to touring the only working gristmill in the Smoky Mountains, visitors here will also find several historic home sites and buildings they can walk through.

The additional buildings found here include a barn, smokehouse, and a blacksmith shop.

One of the most unique homes found in Cades Cove, the Hendy Whitehead Place is considered a ‘transition’ home. It earns this title thanks to the combination of architectural styles that blends the traditional log home and frame home style. Frame homes were houses constructed of sawed lumber.

At the time, the Henry Whitehead Place was the third home in the Smoky Mountains to be built this way. However, it is the only one still standing. 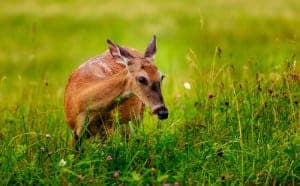 Best known for its natural beauty in the springtime when the dogwoods are in full bloom, the Cades Cove Nature Trail is a short walk that is great for visitors who want to stretch their legs for a minute.

Along the trail, guests will find the remains of what was once a vibrant chestnut grove. However, even though the chestnuts are gone, visitors will still enjoy the beautiful sight of the oaks, dogwoods, sourwood and pine trees that still line The Cove. Just past the entrance to the Cades Cove Nature Trail, guests to the Cades Cove Loop Road will find the Dan Lawson Place. What makes this structure unique is the brick chimney found on the building. Unusual for the time, we are proud to announce that all the bricks used in construction were made in The Cove.

If you look closely, you can also see where Lawson or his family, made additions to the home. This is indicated by the sawed lumber added on top of the hewn logs used in the original structure. The Tipton Place is unique because the owner, Colonel Hamp Tipton didn’t actually live here. However, his daughters did. Lucy and Lizzie Tipton are best remembered as being teachers at the school found in The Cove.

Fun fact, the cantilever barn that stands across the road from the Tipton Place is actually a replica of the original structure that stood in its place. Finally, the last historic building that you and your family should expect to see when traveling along the Cades Cove Loop Road is the Carter Shields Cabin. Back in the day, this cabin was home to Civil War veteran George Washington ‘Carter’ Shields.

Shields was wounded at the battle of Shiloh and only lived in the home 11 years after returning to the area from living in Kansas after the war. If you look at the map above, you will notice that there are two additional roads to the Cades Cove Loop Road that are open for motorists. Both Hyatt Lane and Sparks Lane cut through the center of the open fields at Cades Cove.

These two routes are a useful track if you and your family are running short on time, or if you would like to gain a different perspective of the views found in the area. For convenience, both of these roads are two-way routes.

If you would like to learn more about the Cades Cove Loop Road or other historical structures and history found within the Great Smoky Mountains National Park, be sure to check out the Smoky Mountains information section on our website. In addition to the history of the area, visitors will also find everything they need to know about all the fun and exciting things that the area has to offer. Your Guide to Fire Safety in the Smoky Mountains