Discovery of the Sinkhole

As described in the press release, the sinkhole was first noticed on March 26, 2018, when volunteers from the Trails Forever crew were working in the national park’s backcountry. The crew members were returning from a picnic lunch about a quarter of a mile away from their worksite, when they found that all of their equipment had been swallowed up by a gaping hole in the ground.

Geologists from the National Park Service were alerted immediately, and after a visit to the site in question, the pit was identified as a sinkhole. Located near the Bone Valley Trail, the hole was around 0.7 mile long, 0.13 mile wide, and 0.2 mile deep at the time of its discovery. Since then, the sinkhole has grown exponentially. At the time of the press release, the crater was 2.4 miles long, 1.64 miles wide, and 0.51 mile deep. The area surrounding the hole was already closed to the public for trail restoration work, so park officials opted to delay making an announcement until all of the data had been analyzed.

Sinkholes, also known as cenotes or dolines, are naturally occurring depressions in the earth that are caused by a collapse on the surface layer of the ground. In the Great Smoky Mountains, it is believed that millions of years of rainwater gradually eroded the slightly soluble bedrock found in large swaths of the national park’s land. Although the erosion process can take place over millennia, the actual collapse preceding the formation of a sinkhole can be sudden and unexpected. 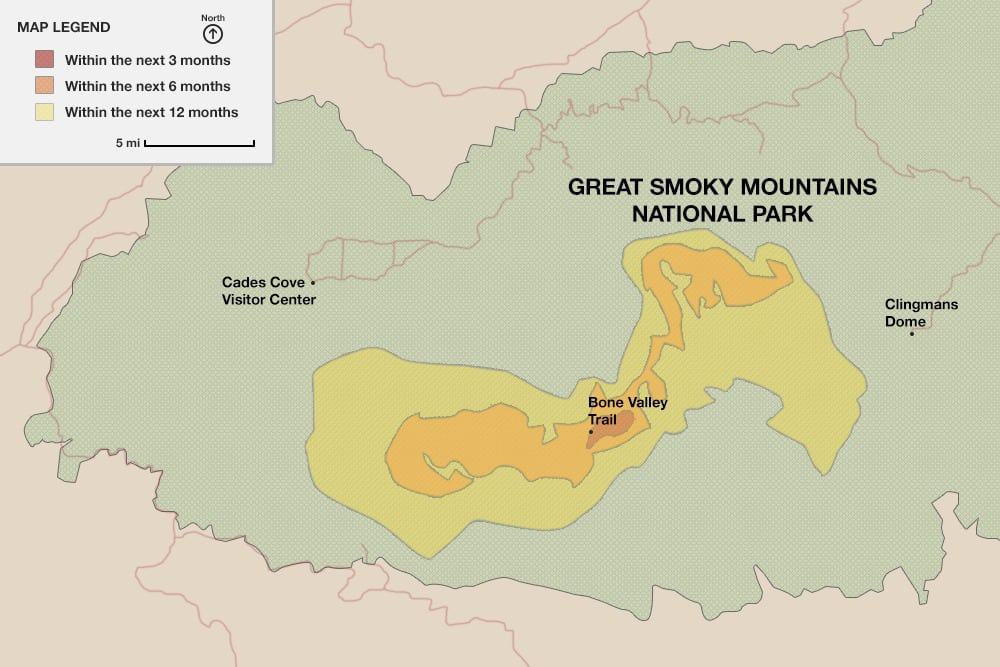 A map showing the expansion of the sinkhole over the next 12 months.

Experts anticipate that the sinkhole will continue to expand at a brisk rate in the coming months. By the spring of 2019, the chasm will likely span hundreds of thousands of acres, with a projected width, length, and depth slightly greater than that of the Grand Canyon in Arizona. Once it reaches this size, geologists expect the crater to stabilize and stop growing.

In the official press release, the National Park Service’s chief geologist, Dr. Ari Kerstein, explains that the Great Smoky Mountains National Park is extremely lucky that the sinkhole is developing where it is:

“If we are going to have a sinkhole, it could not have originated at a better spot. We are so fortunate that the hole is growing in a relatively remote area of the park, away from popular areas like Cades Cove and Clingmans Dome, not to mention the cities of Gatlinburg and Pigeon Forge.”

“This sinkhole is, in fact, a blessing in disguise. Last year, over 6 million people visited the Grand Canyon in Arizona, and soon, we will have our very own Grand Canyon right here in the Smokies. Millions of years of erosion have created breathtaking rock formations that will reveal themselves for the very first time. Personally, I cannot wait to see the fully formed canyon in 2019.” Artist’s rendering of the Great Canyon in the Smoky Mountains.

Tours of the Canyon

Although it will still be about a year before the sinkhole is ready for public viewing, the National Park Service is already planning tours of the so-called “Great Canyon.” Here are some of the tentative ideas mentioned in the press release:

• The park is considering installing a Glass-bottom Skywalk overlooking the sinkhole, similar to the one owned by the Hualapai tribe at Grand Canyon West. The Skywalk would provide incredible panoramic views of the Great Canyon.

• Assuming the naturally occurring pathways in the canyon are wide enough, the park plans to offer llama tours of the sinkhole. As hikers along the Grotto Falls Trail may know, llamas are already used in the Great Smoky Mountains National Park to carry supplies to the LeConte Lodge at the top of Mount LeConte.

• If the National Park Service can find a local business to partner with, there will likely be a bungee jumping station at the Great Canyon. Visitors will have the chance to dive off of the Skywalk for an exhilarating plunge into the heart of the sinkhole.

For the latest information on the Great Canyon, don’t check back here. This entire story has been an April Fools’ Day joke! As far as we know, there aren’t any massive sinkholes hiding in the Smoky Mountains. To learn real facts about the national park, check out our guide to 9 Things You’ll Only Find in the Great Smoky Mountains.